Published by Nintendo, Developed by Camelot

Mario's latest trip to the links requires a slight curve

When Nintendo and Camelot came out with the original Mario Golf on Nintendo 64, it is very likely that players were skeptical. Many people consider Golf a 'boring' sport, so how could that translate into a fun video game? Very well apparently, and while Mario Golf never attained the popularity of the main Mario titles, the series still retains a faithful following. With Mario Golf World Tour, Camelot has largely kept everything that has made the series great, with some divisive tweaks.

As players might expect, Mario Golf is not nearly as complicated as the PGA or Tiger Woods titles, but still has solid gameplay. Players drive and putt using a power bar at the bottom of the screen, stopping the bar by pressing the A button and then either A or B. The first button press sets power, while the second decides at what angle the ball is hit. Most players can get through a few rounds by simply getting 'nice' shots, but the series has a surprising complexity. Elements like wind speed and direction, terrain, slope and rain all affect where the ball will land in addition to the player's own contributions. This was not such a big deal in earlier Mario Golf entries, but World Tour has a startlingly steep learning curve. If players wish to win tournaments, they will likely have to learn advanced techniques and practice a fair amount. While the game does feature a few tutorials, the more advanced ideas are sadly not explained very well and require a trial and error approach to figure out. (Quick Tip: To use topspin and backspin, press A or B when setting impact and then quickly either one again to enable them on your ball. You're welcome!). 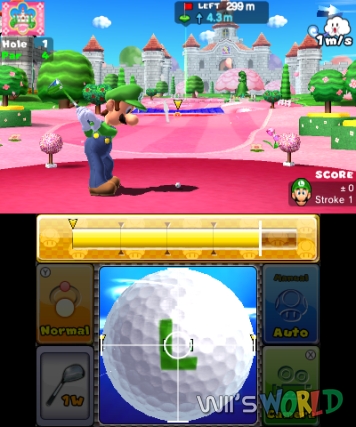 World Tour is split into two main areas. The first is the 'Mario Golf' mode, essentially quick play. In this area, players can immediately enter matches against the computer or online players, enter public and private tournaments, engage in point and speed Golf or try unlocking various things in the challenge mode. These challenges are available when the player unlocks the three 18-hole or six 9-hole courses, and each challenge grants the player a Star Coin. These in turn give new characters, courses and apparel. Challenges include activities from previous games like Ring Golf, Coin Collection and hitting the Star Coins, as well as the aforementioned quick play events.

The other major mode is the Castle Club. This mode is meant to emulate the more RPG-styled Mario Golf games on Game Boy Color and Game Boy Advance. Players choose one of the 3DS Miis that they have created as a virtual avatar in a career mode of sorts. In the club itself, players can play tournaments on the three 18-hole courses, play practice rounds on the 9-hole courses and national or international tournaments which are found in the club basement. The incredibly difficult 'one-shot, one putt' mode is also included, practically forcing players to obtain a Birdie or Eagle on every hole. There are also practice areas for putting, driving and approach shots, which are very helpful for those struggling with their game. Players are also allowed to have practice sessions on the tournament courses, and depending on how they do are given a handicap. If players are finding a particular course difficult, they can enter a handicap tournament which is a great way to practice for the main event. Depending on the course or mode, players may also use Mario Kart inspired items; Bullet Bills allow players to ignore wind conditions, Fire Flowers burn through obstructing trees, etc. Needless to say, the series continues its tradition of a complete golf game.

Mario Golf World Tour does have one glaring flaw over its previous entries, namely an overcomplicated interface. While it is understandable that not every player would want to use the Castle Club, Camelot has for some odd reason made it so that players can only access certain game features in Quick Play and others in the Castle Club. For example, private and public online tournaments which players create can only be found in Quick Play. However, national and international tournaments created by Nintendo can only be found in the Castle Club. There are other examples, like challenges only being in the Quick Play mode or only being able to buy new gear in the Castle Club. Camelot could have extended the geography of the Castle Club location or added separate menu options, so why did they not? Even the Game Boy Color version of Mario Golf did not have this issue, and that was over fifteen years ago. 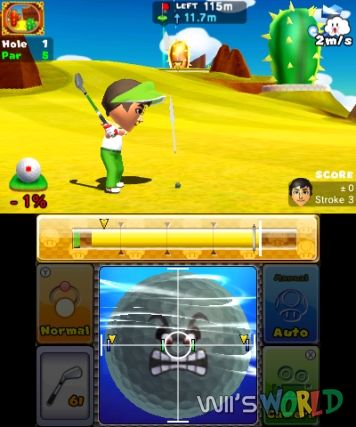 World Tour is largely a very nice looking game. Though the eighteen hole courses are a little bland, they still look nice. The nine hole courses on the other hand look really cool; one Yoshi course is based on Yoshi's Story, there's an underwater area complete with pipes and even a lava lake surrounding courses in Bowser's castle. World Tour is not the best looking 3DS title, but it rivals the GameCube game, and that makes it worthy of praise. The 3D effect is nice, and proves to be almost essential in judging depth and ball position, as the camera is fairly poor. Online play is pleasantly smooth with no lag whatsoever, even with other players or player data while in a match.

The music is good, but not quite at the level of previous Mario Golf titles. Sound effects are similar, with some being brought over from main Mario titles. There is also some limited voice work, which is repeated ad nauseam. Players may wish to turn the volume knob down, as these voices can get annoying quickly.

As mentioned earlier, World Tour has quite a bit of content. It will likely take some time for players to learn the intricacies of Mario Golf, even before the courses. There are over 90 Star Coin challenges to unlock new content, with an additional 90 Moon Coins for even more difficult material. There are three 18 hole tournaments, each very difficult to master, and six nine hole courses to try. Players can make and participate in their own customizable tournaments, as well as compete in matches and current national and international tournaments hosted by Nintendo. As if all this were not enough, six 18 hole courses will be offered as DLC from now until the end of June, with the first content available now. At ten dollars less than the price of a typical 3DS title, World Tour is a very good value for money.

If players are already fans of Mario Golf, they will likely wish to pick up World Tour. Those who are unfamiliar may wish to consider a rental. While this 'family-friendly' Golf game has a surprising amount of difficulty, managing to sink a birdie, eagle, albatross or even a hole-in-one is incredibly satisfying. If players have any interest in video golf and do not mind taking their time, Mario Golf World Tour is one that should not be missed.