In Mario's case, is greed that good?

When Nintendo came out with the New Super Mario Bros. series, the mix of old-school 2D Mario gameplay and modern CG style graphics ended up becoming a success beyond even Nintendo's wildest expectations. Now with the launch of a brand new console on the horizon and the 3DS entering its second year, Nintendo is choosing to once again rely upon their main moneymaker. While it remains to be seen whether or not New Super Mario Bros. U will be another 2D wonder, New Super Mario Bros. 2 feels more like a cheap retread than a successful continuation.

For the most part, NSMB2 is exactly the same as the previous two titles. Mario and/or Luigi is entrusted with saving Princess Peach from Bowser and the Koopa Kids, traveling along the typical themed worlds such as lava, ice, desert etc. There are a few changes, but in many ways NSMB2 feels like a genuine lack of effort on Nintendo's part. 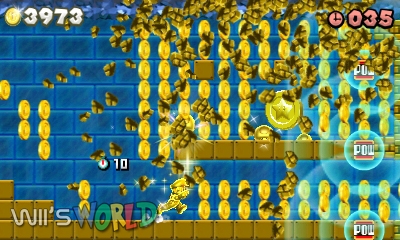 Right from the game's very beginning, NSMB2's 'hook' is in coin collection. Nintendo's marketing department has hyped the goal of obtaining one million coins, offering a surprise after doing so. Though the majority of NSMB2 is indistinguishable from the DS original, minor elements help facilitate this new emphasis on greed. The levels are filled with coins, golden rings make each defeated enemy give coins instead of points, a coin brick helmet produces coins while Mario runs, and a special golden Fire Flower power-up gives Mario his own personal Midas touch. NSMB2 also incorporates Mario's raccoon leaf, which normally would be awesome but has less impact than it could due to having already been in Super Mario 3D Land nearly a year previous.

Unfortunately, the changes given to the NSMB formula in order to try and make it a little different actually make this sequel worse, not better. The coin collection element ends up making the game easier both in level design and the sheer amount of extra lives players will collect while searching for gold. This seems to indicate that Nintendo had difficulties trying to cater to both the fans of the original NSMB on the DS and the more casual fans who were used to multiplayer and an easier time with NSMB Wii. This can also be seen in NSMB2's bosses; the Koopa Kids themselves are not only much easier to fight than they were previously, but every single tower mini-boss is just a slight variation on the platform dinosaurs originally seen in Super Mario World. It feels lazy, especially when compared to the excellent variety in both NSMB and NSMB Wii.

The game does include a Co-Op mode, but this is another feature that seems to indicate a rushed development or lack of effort. A second player can play as Luigi in a similar vein to NSMB Wii. Sadly, not only does the screen not accommodate one player if another is ahead, but one can only have a partner if the player is right next to them, meaning no online co-op. The Coin Rush competitive mode is well implemented, and consists of a time trial competition to see how many coins a player can collect by either time's end or the end of three stages. Players can upload and compare scores via Streetpass, making an interesting way to keep the game going long after defeating Bowser. 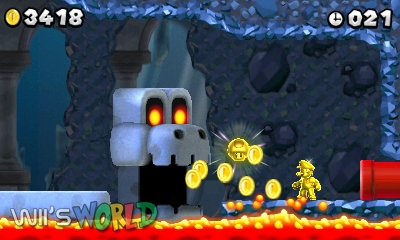 The graphics are great for a handheld system, and it is likely that this game in the franchise actually looks better than NSMB Wii. However, as with the issues mentioned with the gameplay, many of the game's art and character assets look as if they are directly taken from the earlier games in the series. There are little to no new characters, and the final boss is once again a giant version of Bowser. The game doesn't seem to take advantage much of the system's 3D abilities and what makes it worse is that the game looks blurry and unfocused when in 3D.

Continuing the trend of NSMB2 'rehashing', the music in NSMB2 is all taken from previous entries. The only things that sound somewhat new are the slight remixes of previous tracks, but these new versions of old music actually sound worse at times due to a strange insistence on adding the 'wah, wah' chorus in other songs to nearly every track in the game. In the main NSMB theme it's okay, but having to hear that chorus in almost every single bit of music quickly becomes irritating. It's great to hear the classic 'build up speed' sound effect for the raccoon power-up, but not at the expense of the music.

In some ways, this could also be considered one of the shortest entries in the series. Players only need to travel through six worlds to complete the game, and even though NSMB2 no longer features world-hopping warps, it shouldn't take most Mario fans more than a few hours to clear. Admittedly, there are three additional worlds which can be reached via secret exits and these secrets do require a certain number of star coins, but this sequel is still much easier to complete and less packed than its predecessors. Oh, and the one million coin goal? Normally it isn't a good idea to spoil games, but all you get for those million coins is a different title screen. Hopefully that saved some players a few wasted hours of their lives.

In the end, New Super Mario Bros. 2 is by no means bad, and is even fun at times, but it could have been far better. The game feels like a cash grab, which is ironic considering the emphasis on coin collection. If gamers have a choice, they should consider playing the earlier Mario titles before NSMB2. However, if a new Mario fix is what a player absolutely craves, they could do much worse.