These dogs need to learn some new tricks.

Despite only having had one entry thus far, the Nintendogs series has proven to be an amazingly long and consistent seller for Nintendo, selling more than twenty million copies worldwide. With such popularity, it's no surprise that Nintendo came up with an installment for the 3DS launch. Unfortunately, those interested in the series are largely better off just keeping or getting the original DS version as Nintendogs + Cats is essentially the same as that six year old title.

At its heart, Nintendogs is a virtual pet simulator, not unlike the original Tamagotchi created way back in '96. Players choose a pet to take to a predetermined home in order to raise, feed, exercise and groom into a champion. Players are given all of the tasks that are assigned to real pet owners with the exception of vet visits and soiled/destroyed furniture. A few things must be noted to apprehensive players: first off, though there are three different versions of the game, Nintendogs is not like Pokemon. After working through the game's tasks for their pets, players can get additional pets and all 27 breeds of dog do become available, it just takes time. The second is that much to this reviewer's consternation, cats are NOT available immediately and can only be obtained after gaining a large amount of money from dog competitions. Cats also don't take part in competitions, so there's a reason why this game is not called Nintendogs AND Cats. 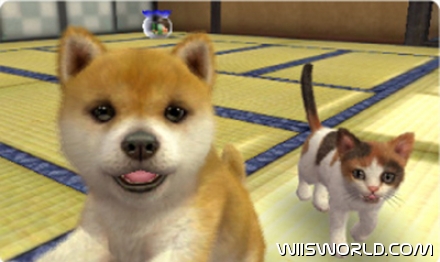 For the most part, the gameplay is identical to that in the first Nintendogs. As stated above, players can feed, groom, pet and play with their dogs and later cats, using toys like frisbees and lures. Players are given a fixed amount of money when the game starts for supplies, but more must be obtained by participating in competitions like races, disc throwing and others. Even last place winners will still get money, in case the player is poverty stricken and needs food money. As the player wins competitions, they unlock new competitions with bigger cash prizes. Players don't need to take care of their pet constantly, but like Animal Crossing the game is designed to be played over the long haul almost every day. Players can also use the AR card to take photos of their pets and go on walks while cleaning puppy waste on sidewalks, just like with real dogs. Surprisingly, these walks are set along predetermined paths and are not like the original Nintendogs. Additionally, players can teach their dogs tricks and have them performed on the fly with voice commands specific to that pet recorded with the 3DS microphone. Whatever is spoken during a particular trick will trigger the action and it's admittedly fun seeing this happen before your eyes.

Being a showcase of the 3DS like Pilotwings Resort, Nintendogs + Cats looks very nice, especially in the sequences when players are at home with their pets. The dogs look amazing and have realistic fur shading. The animations look good too with the pets reacting and moving in a nearly real fashion. The outdoor environments are okay, but aren't particularly special. While it may be part of their casual gamer invasion, it is somewhat irritating that the only 'human' characters in the game are Miis, both random and created by players. It hurts a possible suspension of disbelief towards potential pets and would have been better if there were simply no human characters in the game at all. The 3D effects are fun, and players will at least crack a smile when their pets put paws up and out of the 3DS screen. There's no real gameplay effects though, so the 3D is mainly just cosmetic.

The music in the game is good, but it isn't hugely important to the experience, because there are only so many places to visit, so there are very few actual music tracks. The sound is better, with fairly realistic sound effects and noises made by your pets, varying depending on the breed. 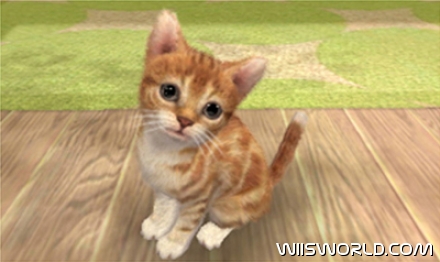 As stated above, Nintendogs + Cats is the sort of title to be played a little bit of time every day or every few days, so it likely won't appeal to hardcore or non-obsessive compulsive gamers. If a player's goal is to obtain three pets at once and win every competition, buy every toy and fashion accessory, it will take a good bit of time to 'finish'. Admittedly though, Nintendogs is not really a game players can 'win', so it's really not a 'game' so much as a toy.

If you love to take care of virtual pets and have never played the first game, Nintendogs + Cats may be something to check out. Series familiars are best left sticking to the original, and those who dislike virtual pet rearing won't be swayed by this outing.