Paper Mario: Sticker Star is the latest installment of Mario's arts and crafts RPG series and the first to show up on Nintendo 3DS. Despite carrying the Paper Mario legacy, Sticker Star has some departures that may annoy longtime fans but it is nevertheless a fun and colorful romp through the Mushroom Kingdom.

The game opens with the standard Mario fare, all is great in the town of Decalburg until Bowser cuts in and wrecks up the place. Mario, now with a new companion and sticker aficionado Kersti are off to find and collect the Royal Stickers which are capable of effecting the world in amazing and dangerous ways. 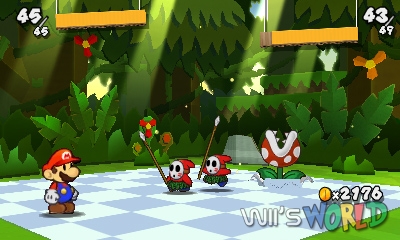 In fact, stickers now have all of the power in Sticker Star. Throughout the game Mario can peel stickers off of almost any surface and add them to his arsenal of moves against Bowser's minions.

Stickers are used for everything, combat included. Each sticker, be it a standard boot or wooden hammer is equal to one single use move that can be performed during Mario's turn on any encounter. That's right, once you use up a sticker it is gone for good. With that in mind it would be wise to stock up and fill your scrap book with plenty of useful stickers.

What may upset long time Paper Mario fans is that there is no experience based leveling system. Since all of Mario's power comes from stickers this time around, the system in place is a little unusual: During each battle, Mario has the opportunity to earn coins by landing extra hits on enemies, these extra hits are determined by simply timing button presses well. Mario can add to his overall health by finding special + hearts that permanently add HP to his health bar. 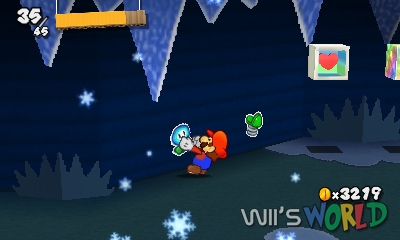 Coins can be used to buy more stickers, so it is good to save up your money in order to keep a fully stocked scrapbook. For some in game currency isn't really enough incentive to keep battling and if you don't do well enough to earn extra coins, sometimes you are just throwing your stickers away on pointless fights. Another way to spend money is on a slot machine mini game that allows winners to use more than one sticker per turn.

The world of Paper Mario: Sticker Star is a diorama come to life and full of puzzles, humor and secrets. The NPCs really know how to be funny and witty with jokes that appeal to all ages, even grown ups. The levels themselves are fun to explore since there are plenty of interesting and hidden areas, some levels even have multiple exits.

Since this is Paper Mario you would expect everything to be well, made out of paper. In Sticker Star this is not the case. As you journey through the game several real life objects can be discovered and obtained such as scissors, a baseball bat, and even a vacuum cleaner. These things can be used to change the landscape of the game map, (such as turning on a fan to move a windmill,) or "paperized" and made into flat stickers that Mario can bring into combat. These large holographic stickers deal out a lot of damage and can often turn the tide of a lengthy boss battle.

Paper Mario: Sticker Star only has six worlds to explore and might feel like a short adventure but there is plenty to accomplish. Finding all of the secrets and loading up the sticker museum takes some doing and will keep you enjoying this game for a good while.

I absolutely loved this game!