After almost two decades, many of Nintendo's classic franchises are coming back for the 3DS. Kid Icarus is one, but the jury is still out as to whether Uprising will be a return to form or a misstep for the adventures of angel Pit. Pilotwings is another game series Nintendo has chosen to bring back, and as a launch title for the 3DS. Does it signal a great return of the classic series for the better? Not exactly.

Unlike the original Pilotwings titles which were developed internally at Nintendo and also Paradigm Software, Resort's development has been handled by Monster Games, responsible for the ExciteTruck and Excitebots games on the Wii. Also unlike the original titles, there are no cartoonish characters who look goofy or similar to Nester from Nintendo Power, instead casting Mii characters as potential pilots. Also gone is the gyrocopter from Pilotwings 64 and some of the more outlandish 'vehicles' like the Jumble Hopper and Human Cannonball events. In some ways the game is still similar to the earlier titles in that you go through rings, ride thermals in the hang glider, take photos, and the Biplane, Rocket Belt and Hang Glider are all taken from earlier games. The changes to the Pilotwings aesthetics may be jarring, but they aren't the biggest problem in the game and aside from hardcore fans, most trainee pilots won't care too much about the changes. 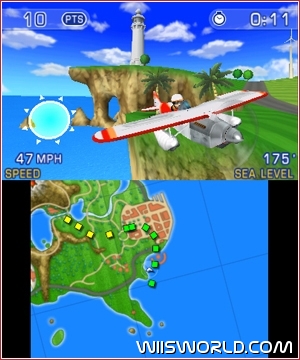 First off, let's answer the burning question. Yes, the game uses 3D frequently and to great effect. It's very difficult to describe as this is a new technology, but with minor exceptions it really makes a difference in Pilotwings Resort. Dodges and lining up landings and targets simply feel different in 3D. Landings, one thing which this reviewer was dreading due to experience from previous Pilotwings games were surprisingly easy thanks to the 3D effects. The graphics are at least the quality of Wii Sports Resort and considering that these are only the 3DS launch titles, it's a good indication for the platform's future. There aren't any noteworthy animations though, and considering there aren't any areas other than Wuhu Island, it definitely feels in some ways like a rushed launch game made with help from Wii source code.

Gameplay is divided into two categories, Free Flight and Mission modes. Free Flight is largely the same as the Birdman missions in Pilotwings 64 and the Airplane stage in Wii Sports Resort. However, you can only fly around the Island for so long before it gets boring. While you can explore and look for hidden items, they aren't much of a reward. Some items do give extra time to fly around the island or items for the Diorama mode (just a small extra in which you see the game's equivalent of concept art), but it can get frustrating that you can only gain certain items with specific vehicles at specific times of day, creating the illusion of replay value. Wuhu Island is the game's only area, and those who have already explored the island in Wii Sports Resort probably won't find this very exciting.

Mission mode is thankfully better, but still very short and feels lacking. Players are tasked with completing a variety of challenges across the island in the three modes of flight and eventually more. After collecting a certain number of stars, obtained by doing well in challenges, players can 'upgrade' to the game's higher classes. In order to gain the most stars, players need a point minimum in each stage based on factors such as time finished, score balloons popped along the way and landing accuracy. The Mission Mode classes start with Training, and go to Bronze level, to Silver all the way through to Platinum. The first three classes are incredibly easy and should pose little challenge, but the game's difficulty takes a huge nosedive up around the Gold class and feels genuinely unfair. For the most part, the game does have a good amount of variety in the mission types, but they eventually boil down to the same tired 'shoot this' or 'go through this ring types'. The game also does a poor job of explaining new concepts and vehicles, despite having control diagrams. There are no 'new' tutorials to explain advanced concepts which would have really helped in the later levels. Even with the added difficulty, the Mission Mode will last at most five hours, making it a difficult game to recommend for forty dollars. 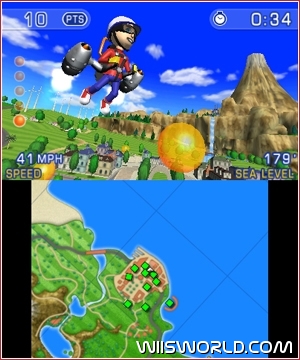 The initial three modes of flight are what the player will use in the majority of the game, but there are a few bonus vehicles including a jet plane, a skydiving 'squirrel-suit' and a sky-cycle straight out of a Miyazaki movie. These vehicles don't add too much to the game, but make for a nice change of pace.

The music is very lackluster. While the tracks sound nice, they aren't especially catchy and sound largely like bland smooth jazz. The sound effects are largely forgettable, but there is at least one that should sound very familiar to fans of Pilotwings 64.

While Pilotwings Resort is a good showcase for the 3DS' 3D technology, it should not be representative of the system as a whole. The game is short, unfairly difficult at times and feels like the developers simply cut and pasted most of the game from Wii Sports Resort. Pilotwings Resort is likely what it feels like: a game rushed out the door to show that Nintendo didn't neglect its own system's launch and one trying to cash in on its own success with Wii Sports.