It's a high score galore!

One thing I miss about being young with saved up pocket money is spending it on arcade games. It's a magical experience as a child, going to the arcades and blasting coins out on games like Time Crisis. Sadly I have missed those times, I respect having money too much to spend it on a whim and arcade machines are getting ridiculous to play. It's £2 to play a song off Guitar Hero Arcade - just the one, I'm pretty sure you can get GH: Van Halen for that price now.

Resident Evil: The Mercenaries 3D is a high-score based game that just screams the word 'arcade' right into our faces. You don't need to worry about any storyline or protect anyone from getting their heads sliced off with a chainsaw. Some people will hate the lack of storyline, I do find it a little troubling, but it doesn't affect the game massively. Anyway, it's all about you, you're the man or woman with the weapons and your main goal is to kill the infected by either shooting them or crushing their skulls with your boot. 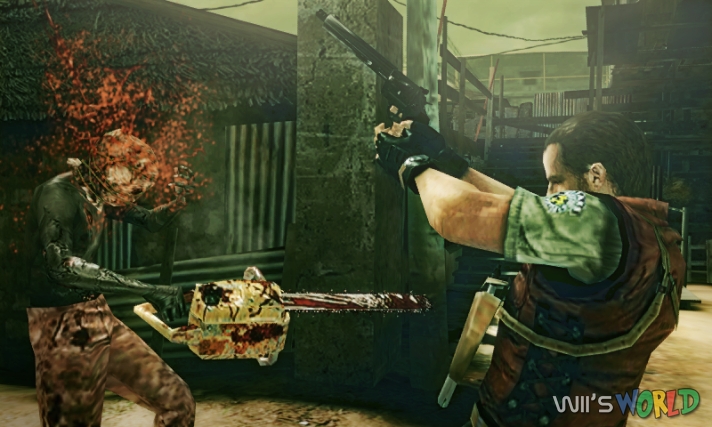 The gameplay of this game is typical Resident Evil, it's all about shooting, moving and kicking ass. One thing I like about Mercenaries is how you can shoot while you move, which is refreshing compared to the other games. The first level is your tutorial and it pretty much explains everything you need to know about the game in the first few stages. It shows you how to shoot, climb, run, turn around... everything essential to Resident Evil combat.

Zombies are very easy at the start of the game, which was surprising to me at first. One zombie approached me and I was like "no, back off, back off bitch!" - before realizing he wasn't going to attack. Even though this was a little while after the tutorial, I still think that the zombies should attack you rather than standing still in the daylight.

The difficulty does start to increase rapidly however. The movement of the player can be really clunky, especially during boss fights, and when you want to move around to pick something up you've got to be quick about it. The difficulty changes from laid back to frustrating within a few stages, and this is what keeps the adrenaline going. Enemies come left, right and center and get more aggressive. 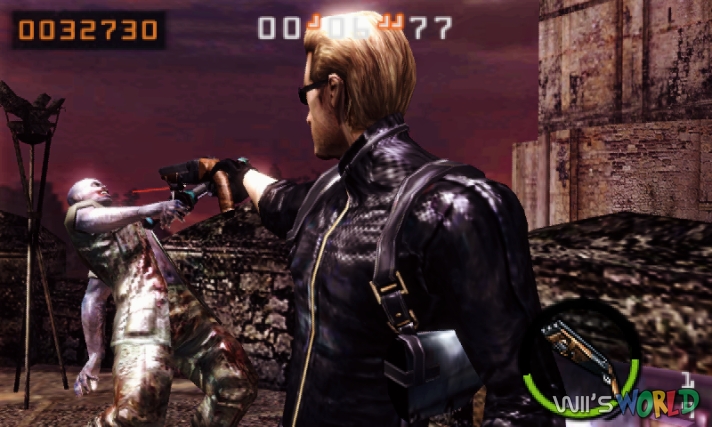 You have a collection of characters who are all legends in the world of Resident Evil. Each selectable character has their own choice of weaponry. These weapons range from crossbows to grenade launchers, and it's best to use whichever suits your style of play.

Even though the controls can get annoyingly clunky, the whole game just feels like it should be in an arcade. It's fast paced and you never have any time to rest as someone is always flailing a mace at you. Graphics look top notch. The 3DS has the potential for beautiful visuals, and Mercenaries delivers on this potential.

The main problem I have with Mercenaries is the movement of some of the enemies. At the start, shooting the easy zombies was, excuse the pun, a blast. However I've noticed when they stumble they seem to struggle with animation. It reminded me of the PS1 era, with the whole rapid moving animation that wasn't convincing. It's as though a few frames get missed. Other than that, the enemies that are recognizable from previous games look great on the handheld console. The blood effects and the weaponary are up to scratch as well, just about. It's an early 3DS game so you have to give it the benefit of the doubt. 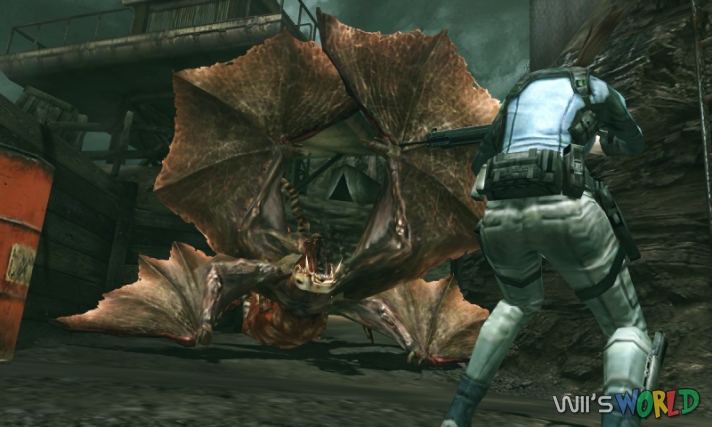 Mercenaries' sound is mostly brilliant. The preparation screen gives us epic music with cheesy yet somewhat welcoming sound effects. The music during gameplay is more intense. You have plenty of action going down and there is an orchestral score playing in the background to make you feel like you're part of something epic. The weapon sounds aren't the best in the world as they sound like they were recorded through a voice recorder. You can recognize which gun they come from, but seem poor in quality.

A fundamental aspect of this game is to get the best score you can, and that's where it has replay value. Mercenaries will make you want to go back and try again. Mercenaries doesn't give you a chance to rest when the gameplay kicks up a bit. It keeps you on your feet and doesn't want you to stop until the time runs out. In the tutorial levels you will get shouted at for either standing still and doing nothing, or running away from the enemies. This shows that Capcom wants to keep the adrenaline flowing throughout the game, motivating you to do better on your high score.

Resident Evil: The Mercenaries 3D is a fine example of what an arcade game should be. Some Resident Evil fans will love this, and some wont like it due to a lack of storyline and puzzle solving. The content does sadly lack, as there was ample opportunity to put a well structured storyline in this game and still keep all of its good points. On the plus side, Mercenaries may introduce a new batch of fans to the franchise who could probably be influenced to buy the canon games.

Resident Evil: The Mercenaries 3D is definitely a game to pick up, its brilliance mainly circulates around the engrossing gameplay and the replay value of the high score system.