Published by Bandai Namco, Developed by -

Not so super after all

I can't for the life of me remember a time when a Power Rangers game came out that didn't get met with negative reception. Much like other licensed video games based off movies or television shows, Power Rangers never quite got the hang of translating well into video games. While a good game based off the popular series is definitely possible, it has yet to happen, and that is unfortunately including the most recent Power Rangers game, Saban's Power Rangers Super Megaforce.

The game is a beat'em up, and not a particularly thrilling one at that. Gameplay mainly consists of running through bland, linear levels as you're occasionally blocked by enemies that you must defeat in order to progress further. You can choose which ranger you want to play as, as well as another ranger for your CPU partner. While the rangers do each come with different weapons and moves, combat in this game just isn't very satisfying. Your most effective means of attacking, regardless of what ranger you're playing as, will always be just mashing the A button over and over again. There are different moves, but they fail to be of any real use when compared to the standard A attacks. 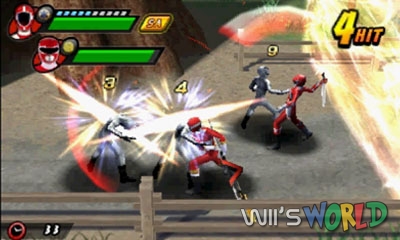 Admittedly, the action starts to pick up a little each time you're thrown into a boss fight. You get to play as a giant robot known as a "Megazord", and you're pitted against another enormous robot that just so happens to want to kill you. Combat here consists of blocking, dodging, and attacking your opponent in all the correct patterns. It's nothing very notable, but it is a slight step up from the game's usual affairs of running through insomnia-curing levels and constantly beating up uninspired baddies.

There is a shop in the game where you can spend any coins you picked up in your playthroughs on certain items, and you can even level up each ranger the more you use them. While these elements are welcome, they hardly help save the game from being not much more than a snooze-fest. You can also unlock new playable rangers by purchasing Ranger Keys in toy stores and scan them using the 3DS, but unless you're a die-hard fan of Power Rangers, don't expect to be compelled to go out and get these things.

As far as presentation goes, Super Megaforce fails to impress. The graphics aren't appealing, the levels look dull, and the animations are laughably stiff and robotic. While I don't think anyone was really expecting this game to push the 3DS to its very limits, it still could have done a better job presenting itself. That way, if the gameplay sucks (which it does), then at least our eyes won't have to suffer as well.

For Power Ranger fans looking for a good Power Rangers game, you're unfortunately going to have to wait longer. Super Megaforce fails to deliver anything impressive, interesting, or fun to the player, and it's a shame that the Power Rangers name is still a laughing stock as far as its video games go. Unless you just have to have a new Power Rangers game, don't bother with this.