Demon taming for fun and profit!

Though it does not have the popularity of either Final Fantasy or Dragon Quest, the Shin Megami Tensei series has remained a favorite for years. Lately the series has been gaining in popularity in the west for those disillusioned with the direction Squaresoft has been going by both trying new ideas and keeping what works for Japanese RPG games. Devil Survivor Overclocked has been touted as a remake of a DS game released only a few years ago, and though the game is more of a 'special edition' than a remake, it is well worth picking up for 3DS gamers unfamiliar with the title.

Unlike most video game RPGs which tend to focus either on Celtic fantasy, Science Fiction or apocalyptic scenarios, the Shin Megami Tensei games usually take place in a contemporary setting similar to Earthbound and various anime, specifically in Tokyo. In a tribute of sorts to the original Megami Tensei games on the SNES (which never came out here), the player and their friends are given a computer program and special devices which not only allow them to use and catch an increasingly hostile horde of demons inside Tokyo, but also even the odds for humans fighting them. Like in the earlier SNES games, players soon discover that the demonic presence has attracted a demon worshiping cult, the Japanese Self Defense Force and even reincarnations of Cain and Abel to name a few. Initially the player and their companions are simply trying to find a way out of a locked down city, but are given a choice of whether or not to run from the chaos, fight it, or embrace it. There are many different endings and this somewhat darker story has been done in earlier SMT titles, but is still a nice change of pace from common RPG cliches. 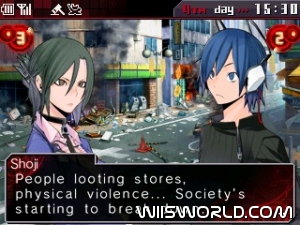 For the most part, the gameplay is part strategy game, part RPG. Most of the time the player is fighting demons and enemies, using a grid system similar to that in the Disgaea and Final Fantasy Tactics series, with combat almost exactly like Dragon Quest or any JRPG. Each enemy has its own distinct weakness which can work in your favor however, and it pays to experiment with different spells on different enemies. In addition, little wrinkles like whether it is better to defeat a group of enemies quickly or slowly to gain more experience gives Devil Survivor more depth than most strategy titles and is streamlined enough that it is a far easier title to get into than say Tactics Ogre. In addition, special objectives are sometimes added to story missions (like protecting certain people) and there is more than one way to finish the game, giving a certain amount of replay value. Unfortunately, Devil Survivor's JRPG roots are prominent in that a rather large amount of grinding is necessary in order to survive some of the later sections of the game, and this can drag on far longer than it should. Likewise, sacrifices have to be made and unlike say Mass Effect, the game simply does not allow you to save everyone possible, which can be somewhat disappointing.

Being touted as a 'remake', one would think that Atlus would have improved Devil Survivor's graphics and presentation, but that simply is not the case. The pixel-based DS graphics and static character portraits during story scenes have not been changed at all, and it is more than a little disappointing that they haven't. Likewise, there is little to no use of the system's 3D element and players are better off turning the 3D slider totally off for the game.

Though there have been changes made to the game's sound, they aren't necessarily for the better. The music, like the graphics, is entirely unchanged from the DS original, however every one of the game's story sequences now have English voice acting. Unfortunately, this 'acting' is comprised of B-list actors at best; one actress seems to be doing three different characters with the same voice, and almost everyone else either comes across as unenthusiastic or inappropriate for their character. Turn the voices off and do yourself a favor. 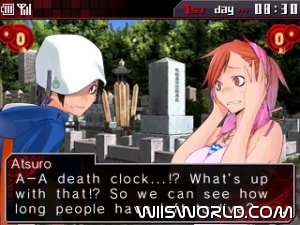 Aside from the aforementioned voice work, there has been little else added to Devil Survivor Overclocked. There are now an additional 20 demons to the roster and a mini-game which allows for a way to obtain rare demons, but neither add much to the experience. The only significant new content is the new '8th day' which is an extended epilogue of sorts for after the main game has ended. There is a fair chunk of new material added, as each of the game's six endings is given new material. That being said, it does not warrant enough content to be called a remake.