Announced along with the 3DS itself, Star Fox 64 3D has been one of the most widely publicized of the 3DS's early titles. While Zelda: Ocarina of Time 3D was a welcome adventure for the 3DS, has Star Fox 64 aged as gracefully?

The story in SF643D is exactly the same as it was back on the N64. Players are put into the role of Fox McCloud, leader of the mercenary unit Star Fox. The unit is hired to defeat the evil scientist Andross, and does so by attacking with the special Arwing fighters. The gameplay is mainly an on-rails style space shooting game, with the occasional all-range fight against a boss or invading army. Though players are given the option in certain levels of using a tank or a submarine, they don't change the gameplay that much. Skilled players will find hidden paths to new planets and even years later, Star Fox 64 is still a fun game to go through more than once. Ultimately though, if players have been fighting in the Lylat system since 1997, they won't find much if anything different in the campaign for the 3DS version. The only exception is a new 3DS difficulty and control scheme which uses the 'moving the system' gimmick which Nintendo is so fond of lately. 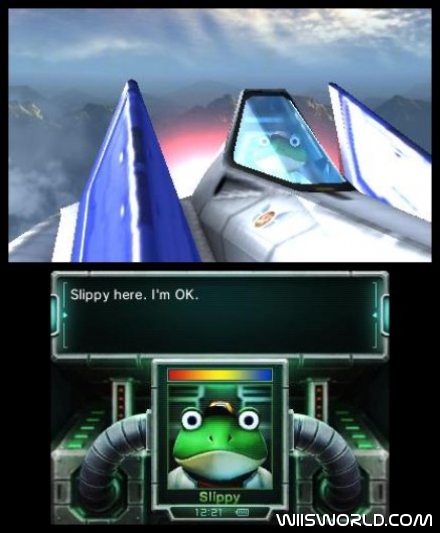 Much has been made of the 3DS version's new multiplayer mode, which has entirely replaced that of the N64 version. Both the Landmaster tank and the on foot versions of the characters in multiplayer have been eliminated entirely, making for pure Arwing gameplay. There are several multiplayer modes including Score Attack, Free for All and Capture the Flag, which are standard in multiplayer. Players also have the option of playing either against computer opponents or human players in local multiplayer. The new multiplayer levels are based on planets in the campaign but are entirely arena based and add new layers to said planetary areas. However, the multiplayer doesn't add much to the package because of the baffling omission of online multiplayer. Considering that the 3DS hasn't even been out for a year, it is very unlikely that players will find other humans nearby with a 3DS and makes one wonder exactly how far along Nintendo really is with their online support.

The game's high point is the amazingly detailed graphics, redone almost entirely from the blocky polygons of the N64 days. Certain characters look almost completely different in their profiles, water effects and rain give great mood and atmosphere and the environments feel almost alive. Even if players don't pick up the game, they owe it to themselves to find videos of it and admire the visual quality. What can't be replicated though, are the stunning 3D effects. This is one of the few games that uses the 3D effects for gameplay as opposed to just eye candy, and it makes one drool in anticipation for a brand new Star Fox on the system.

The game's sound is mostly good, but could have been better. Nintendo seems to have thankfully learned from their mistake with Zelda: Ocarina of Time 3D; while the music in Star Fox 64 3D isn't new, it has been entirely remixed in an orchestral style to great effect. Unfortunately, the same cannot be said of the voices. While some of the original voices from SF64 have come back (i.e. General Pepper, some of the bosses, etc.), all of the main characters have new voices, and nearly all of them aren't very good. While they are not quite as bad as Nintendo's usual attempts at finding voice actors, that isn't saying much. Surprisingly, the only decent voice among the main characters is Slippy who sounds better than his original voice, or just less wimpy. Regardless, when the best voice of the original cast is Slippy, it is obviously time to get someone else to do the company voice work.

Overall, Star Fox 64 3D is a very well made remake, but it simply isn't worth forty dollars. If Nintendo had gone the extra mile and included an online function with the multiplayer, the game may have had a great value, but even with the new coat of paint it still feels like a cheap cash-in. The 3DS needs games that will justify this expensive price tag and a game that one can finish in less than an hour is not one of them, especially when one can get that same game on the Virtual Console for only ten dollars.