Fun, if a bit shallow.

Unlike most Nintendo system launches, none of its star mascots have come to the launch of the 3DS whether it be Link, Mario, Samus, Kirby, Fox McCloud or even Pit. In fact, the only title coming from the internal Nintendo teams at all has been Steel Diver, a title that seems somewhat esoteric for a Japanese company. While it is fairly obvious that like Pilotwings Resort, Steel Diver was rushed to meet the launch lineup, it's a lot more fun playing in the water than it is in the air.

Steel Diver casts you in a fairly generic role, namely that of a submarine and its crew. You are tasked with stopping the forces of a country who has invaded neighboring countries without abandon, and the game is set in the ambiguous year 199X. While players are allowed to choose between three submarines and their captains, the choice only affects gameplay and all they need to know is that you're the submarine. Strangely, most of the game's objectives don't have you fighting enemy vessels, but focus more on securing naval routes with the occasional giant sea monster, so the story is essentially window dressing. 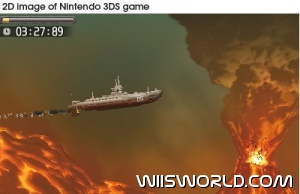 The game is a 2D side-scroller with 3D effects. Unlike Pilotwings, players can go through Steel Diver with the 3D slider set off and not notice much of a difference. Rather than control the submarine with the D-Pad or Circle Pad, the bottom touch screen and stylus are used to control the submarine's pitch, depth and momentum both backwards and forwards. There are three different submarines, each with their own strengths and weaknesses. The first submarine is far more maneuverable than the others and doesn't require a pitch to control, also having the ability to fire torpedoes vertically; The second submarine isn't very maneuverable but is very tough and can carry the most torpedoes and the last submarine is a balanced ship between the two. This choice is nice because some players might find it easier to complete objectives in a way that others don't.

Steel Diver is largely a slower paced game than most 2D scrollers, as it isn't as simple as just going underwater and crashing into walls without consequence. Keeping your submarine at a good speed and depth is extremely important, as is correctly aiming your torpedoes. Not only do subs encounter enemy Battleships on the surface and subs underwater, they also run into mines, buoys, underwater volcanoes, boulders and even giant monsters. Each has a different method of getting past or eliminating, and even small encounters can get tense if players aren't prepared. Though the controls are difficult to understand at first, their depth soon becomes apparent and will make players feel very much like they are controlling an actual submarine.

The game's graphics are nice, but considering that the majority of it takes place underwater in 2D, they really aren't anything special. In fact, it's likely that they could have been done easily on the original DS. There are a few standout areas like the underwater volcano, but they're few and far between. Again, the 3D is nice, but it doesn't add much to the game itself and is fairly forgettable. 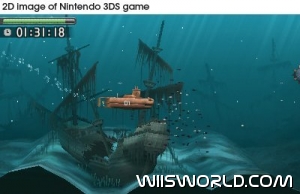 The music is also okay, but the sound effects stand out a lot more. Authentic sounding submarine pings play out when the player gets closer or farther away from enemy vessels and obstacles and the underwater momentum sounds are great too. Likewise with the digitized voice samples when players adjust the movement knobs to fully surface, dive or go forward and back.

Unfortunately, despite being very fun to play, Steel Diver might not be for everyone, especially those looking for a faster paced, twitch-based shooter. Also, the game itself doesn't last very long with only seven missions in the mission mode. While the game does encourage the player to play through each mission multiple times with different submarines, there really isn't much incentive to do so. A Time Trial mode has been included as well, but that's only good if you like the game enough to attempt speed runs with very slow submarines. There is a multiplayer mode, but it only consists of the game's first person periscope mini-game, which was shallow to begin with.

Overall, Steel Diver is at least encouraging because it shows that Nintendo is willing to try something new. It's very short, but it is one of the few titles worth getting in the 3DS' launch library for those who aren't fighting or strategy fans.