The Legend of Zelda: Ocarina of Time 3D

The Legend of Zelda: Ocarina of Time 3D review

The best version to date of an enduring classic.

Ever since the debut of The Legend of Zelda: Ocarina of Time, everyone, including Nintendo themselves have tried to make a game that could either match or exceed Ocarina's brilliant design. Unfortunately, as the game essentially invented the modern action adventure game, no one has managed this feat just yet. For Link's 3DS debut, Nintendo wisely decided not to reinvent the wheel, instead opting to bring both new and old gamers back to what is arguably Link's finest adventure, but with some improvements over the aged N64 classic.

For those unfamiliar with the game's story (all two of you), Ocarina is essentially a Zelda prequel to the NES and SNES titles. For years, Ocarina has been the very first Zelda title in the timeline, and explains how Ganon rose to power and became monstrous, a bit of back story explained way back in A Link to the Past. Link is raised by the Kokiri, spirits of the forest, and is tasked with protecting the Tri-Force by a young princess Zelda. Unfortunately, this doesn't pan out, and Link is forced to travel forwards and backwards in time in order to try and undo the mistake he and Zelda made. 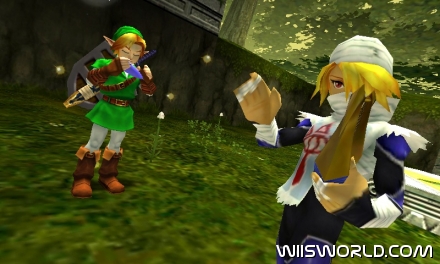 Gameplay wise, Ocarina remains almost the exact same game as it was back on the N64 and Gamecube, though with some portable refinements. It is far easier to aim and move Link with the 3DS circle pad and feels much more comfortable than the bulkier analog sticks of both the N64 and Gamecube. In addition, it is far easier and more convenient to switch items and gear on the 3DS touch screen, which also includes a handy map of whatever dungeon or area players are currently in. These might seem like minor additions, but they will definitely go far in eliminating dungeon headaches, especially in the Water Temple. Other than these additions, the controls are mapped well and though they don't feel exactly the same as previous versions, they are easy to get into.

Probably the greatest area of improvement in the 3DS version is the visual presentation. Though the game's actual geography remains the same, the entire world of Hyrule has been redone not only in 3D, but also with redesigned graphics and details. Character models look the closest players have seen in years to what is in the actual Zelda concept art and nearly all of the blocky and jagged polygons have been entirely eliminated. The draw distance is far better, and the frame rate stays smooth as butter, a welcome relief to the hiccups present in the earlier versions. There are no pauses before going into the inventory screens and players will want to explore as many areas as possible in order to see the wealth of details that developer Grezzo has added to the game. From a bustling Hyrule Marketplace, to a more elaborate Temple of Time, one can tell that a lot of love was put into the visual design. The 3D effect is also the first time this reviewer actually thought the game looked better with it on a 3DS, as opposed to the window dressing and simple effects on other 3DS titles.

Unfortunately, the same amount of care and detail is almost entirely absent from the game's sound and music. Everything save the game's credits sequence is entirely the same from the earlier versions of Ocarina. While this music is still toe tapping and holds up well today, it is irritating that Nintendo could not have simply asked to borrow music from ZREO or someone similar and gotten non-MIDI music for Ocarina's portable debut. It seems lazy, when the graphic design clearly points otherwise. Maybe there just wasn't enough time before the game shipped, but it is still disappointing. 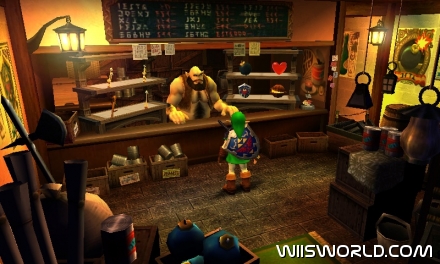 Also, there is not really any noteworthy extra content, as opposed to the bevy of content in Super Mario 64 DS. Aside from the main game, players are also given the option of a harder 'second quest' in the form of the previously released Master Quest. Also, a boss rush mode is added which allows Link to fight previously fought bosses again from the comfort of his own tree house. The Master Quest mode has been mirrored, but it is likely that most hardcore Zelda fans have already gained it by preordering The Wind Waker way back when and the Boss mode, while nice, isn't substantial enough to justify a brand new purchase.

Ultimately, whether or not you purchase Ocarina in 3D depends on your preferences. If you haven't gone through the Master Quest mode yet, and would love to have a version of Ocarina to play while on a plane or car, it is definitely worth the money. However, if you prefer to play at home on your television and have other games you would prefer to play while traveling, the game is far cheaper on the Virtual Console. This reviewer thinks that it is worth a purchase, even if others likely will not. It is a well made and good re-release of an enduring classic, but it still could have been better.