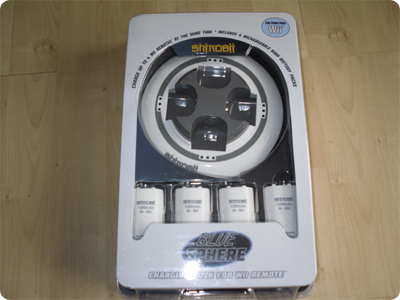 The Blue Sphere Charging Dock is intended for Wii remotes and has been created by peripheral makers Shinobii. The honorable electronic ninjas at said Shinobii were kind enough to send me one of these chargers to review and spread the good word. They also packed in a frisbee which flies pretty good, but I digress.

Initial impressions are positive. Sure it's not technically a 'sphere' per se, more of a fat disc shape, but its aesthetics are still undeniably cool in a sci-fi kind of way. Once you get it out of the nightmarish hard plastic packaging, the device feels reasonably solid and well put together.

The power cable is one of those pass-through dealies that leeches off the Wii's supply, which is handy as it eliminates the need to use up an electrical socket. This setup doesn't require the Wii to be powered on either, so there are no real drawbacks. Sporting spaces for up to four Wiimotes, the Blue Sphere should have all the capacity you'd need. Shinobii has innovated over other chargers on the market, each slot has three LEDs to indicate how charged it is (representing 33%, 66% and 100% stages). This is a welcome addition, although getting a remote into a slot can require some jiggling to make the plates touch. 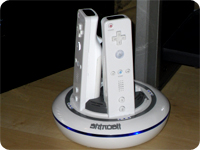 Included in the box are four NiMH battery packs which fit into the back of your remotes. They claim to provide up to 20 hours of gaming on a full charge, which actually seems about right given my experience with them. The picture doesn't convey this very well, but when it's connected up the Blue Sphere has a permanent blue glow from the ring around its middle. This matches the Wii console's own glow and the two look a fitting pair sat next to each other. Unfortunately this blue aura permeates the inside of the device and has an unwanted side effect, it makes the LEDs, which are also blue, a little hard to read.

*UPDATE* - Shinobii tell me that in the final product the LEDs will be transparent, not blue, making it easier to tell whether they're on or off.

It will retail at $39.49, including four battery packs. Amazon lists a release date of August 30th for the US, preorders are open if you fancy picking one up.

Pro Pack Mini
Pro Pack Mini review For anyone who finds the standard Wiimote clunkier than it needs to be, a company..