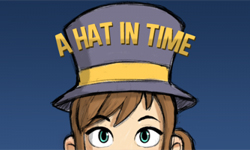 Could be heading this way

A Hat in Time is a great looking adventure game by Danish developer Mecha the Slag (!), real name Jonas Kaerlev. In a recent interview he revealed that there's a good chance his title could come to the Wii U eShop.

Check out some game footage below. It feels to me like a cross between Wind Waker and Mario Sunshine.

Definitely some kind of Delfino Plaza vibe there.

Mecha the what?? Looks like a lot of fun, I love games of this style.