Bayonetta 2 is a Wii U exclusive 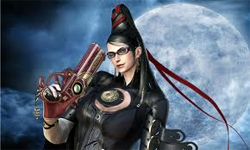 You heard right, it's an exclwiiusive! Yea.. that word is never gonna catch on. Bayonetta 2 was announced by Reggie Fils-Aime earlier today at the Wii U 'show and tell'. It's being developed by Platinum Games, which is a Japanese studio with some pedigree - they're the guys behind games like Vanquish, Infinite Space and before that, MadWorld (ehh..).

Bayonetta is the name of the main character, a woman who uses four pistols (seems like overkill) and magic to take on enemy attackers. Here's a little video, although I can pretty much sum it up by saying "Bayonetta 2 is coming".

The original passed me by, but I am semi-interested in it.

This will be insane, but in a good way hopefully.