At a recent European event, Electronic Arts unleashed some more information about Boogie.

We also have a picture of the mic used: 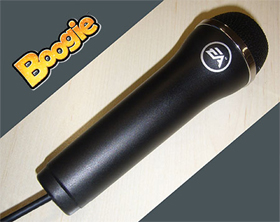 Last up is the box art, cherish it. 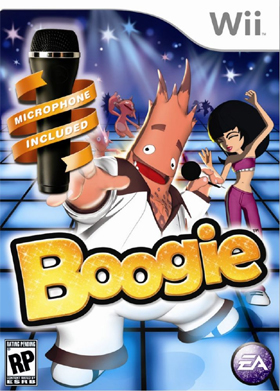 At this point in time I have no intentions whatsoever of even so much as renting this game, but then again, I don't know much about it. Perhaps it'll be a revolutionary, innovative game that brings forth a whole line of new games of its type. It just might the start of something great, but I doubt it.

Well, the box isn't good looking, but at least the graphics are PIMP.

Sweetness, but I don't really like how the mic looks.

So is this the mike that will be used for all the games?

EA sure put a lot of effort into this game, I'll give em' that. As for the box art, hopefully the PAL version will look better; it's usually like that- no offense.

Goomba got his boogie shoes on.

A wireless headset mic would be ideal. And why is Patrick the Starfish dressed like John Travolta?

Hey guys, do you think there's a chance that nine inch nails would be included in the category of dance music? *offers hand for nin fans to high five*.

Is that not the same microphone we have seen for the ps2 with an EA sticker on it?

That IS John Travolta!

That mics impressive bring on the head set.

Three things. 1) Where does the mic hook up to? 2) Can we find out what songs will be in the game? 3) The controls sound confusing. 4) 3d glasses?! What's up with that? That is so random.

The mic must be white. Black isn't the Wii Style. I'll wait release and reviews of final version.

I'm lovin this game and the mic is great too. The lead on it is quite long which is great for moving around the room when you're dancing.