Some people must be lapping these games up, because Activision has announced another title in the Cabela hunting range. Even more comical, it comes with a shotgun peripheral for all your bear-blastin' needs, pictured below.

Cabela's Big Game Hunter 2010 will be released on September 29th in North America for Wii, Xbox 360 and PlayStation 3. The Wii version can be purchased with the innovative Top Shot hunting peripheral, packaged with the game. In Big Game Hunter 2010, the player must combine precision, guts and technology to earn a place among world's most respected hunters.

Activision's David Oxford commented: "We're elevating the first person action hunting genre because it's what fans demand. Skill, extreme danger, real world equipment - you get all of that in Cabela's Big Game Hunter 2010, and it all takes place in stunningly rendered outdoor environments packed with animals that look and act like the real thing. 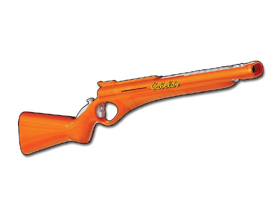 Players must seek Super Hunter status aiming to take their game to the next level and join the ranks of hunting's best of the best - a club where it takes much more than tall tales to gain respect. Players must prove their fearlessness and ability by successfully bagging the largest trophies in the world's most rugged regions. The most prized animals can only be reached by climbing cliffs, crossing raging rivers, and facing countless more perilous situations. Brand new elements, such as rewards for successfully using cover to progress through missions and a VITALS system which helps players visualize the perfect shot, promise to make this the most fun and action-packed Cabela's game yet.

The Top Shot peripheral for Wii adds a new level of realism in heart-pounding hunting adventures - just take a few seconds to load the Wiimote and Nunchuk and you're ready to put the trophy buck of a lifetime in your crosshairs. In addition, the Wii version includes 13 arcade style shooting galleries, including 4-person multiplayer.

So we can get our multiplayer on like in Big Buck Hunter arcade games?