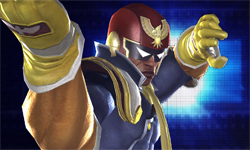 Some new screenshots and a video from Namco Bandai show us that even more Nintendo character costumes are set to appear in Tekken Tag Tournament 2 - as well as the side game "Tekken Ball". The newly announced costumes are:

Tekken Tag Tournament 2: Wii U Edition is really shaping up to be the definitive version. Here's a brand new trailer:

The biggest entry in the TEKKEN series has gotten even better with exclusive modes, features and costumes that focus on the TEKKEN series' more wacky and surreal side. The new assets highlight the return of the TEKKEN Ball mini-game and even more Nintendo crossover costumes from legendary Nintendo franchises such as: Super Mario Bros., The Legend of Zelda, and F-Zero.

TEKKEN TAG TOURNAMENT 2 Wii U EDITION gives players the unique opportunity to outfit the entire cast of the TEKKEN in special Nintendo franchise crossover costumes. The costumes announced today include Toad and Princess Peach from Super Mario Bros., the mysterious Sheik from The Legend of Zelda: Ocarina of Time, as well as Captain Falcon from the futuristic F-Zero racing series. These are in addition to the already announced Zero Suit Samus, Mario, Luigi, Bowser, Fox McCloud, Link, Zelda, and Ganondorf costumes.

TEKKEN Ball returns to TEKKEN TAG TOURNAMENT 2 Wii U EDITION, after a long absence. Originally seen in TEKKEN 3 for the PlayStation, TEKKEN Ball lets players square off in a fun volleyball/dodge ball hybrid. Players must protect their side of the court by hitting a ball over to the other player's side of the field. The longer players volley the ball back and forth, the more damaging the ball's attack will be when it hits a player. TEKKEN Ball includes multiple types of balls with different speed and damage properties along with tournament and exhibition modes.

Check out a host of new screenshots on the Tekken Tag Tournament 2 page.

Maybe not a day one purchase for me, but looking really good, probably wait a while for the price to come down.