Another fitness title is on its way to the Wii, this one is all about Pilates and I'm guessing it's aimed at a womanly audience.

Daisy Fuentes Pilates, the first self-titled Pilates game, goes beyond the one-way, static workouts of traditional DVDs using the Wiimote controls to monitor movements and offer instant feedback, ensuring proper body motion so players get the most from every exercise. Players stay on track following the integrated, on-screen timer as well as the words from Daisy herself, whose voice guides the session. 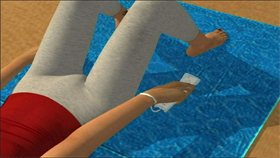 Daisy Fuentes Pilates will support the use of Wii's Balance Board, and amigos can choose to play in either English or Spanish. It's coming out this Summer, more screenshots available on the game's page.

SEGA is both desperate and stupid this time.