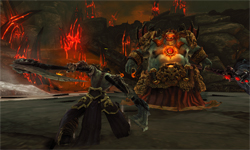 A third downloadable content pack is being released for Darksiders II on Xbox 360, PS3 and PC tomorrow, Tuesday, December 4th 2012. It's called The Demon Lord Belial.

This is how publishers THQ describe it:

Little has been said of the struggles on Earth besides the story given to WAR by the Charred Council. Rumors have now surfaced that perhaps the Third Kingdom was not completely destroyed, and remnants of humanity still yet survive! It falls upon Death to seek out the truth and unearth a forgotten evil... The Demon Lord Belial.

Uncover a new adventure based on a ravaged post-Apocalyptic Earth, where Death will encounter the last remnants of humanity as well as one of his most sinister opponents yet.

Even on the official website there's currently no mention of when Wii U will get The Demon Lord Belial and other previous expansions. It's reported that the Wii U eShop isn't yet capable of supporting DLC, but will have that feature added soon - so patience may be in order.

I'm pretty sure they will come, the eShop on Wii U is just in its infancy right now.