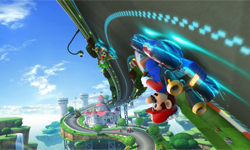 Nintendo are no doubt hoping that lackluster sales figures of the Wii U console will receive a shot in the arm next month with the release of Mario Kart 8.

For the first time, Mario's karting escapades will have HD visuals, along with anti-gravity sections of track and a number of other features from recent games - like motorcycles, 12-player action and underwater racing.

Players will be able to use a number of control methods, namely the Wii U GamePad, Wiimote and Nunchuk (including the Wii Wheel) and Wii U Pro Controller.

Here's one of the first promotional videos for MK8, aimed at the UK market:

The release dates are pretty close together, no matter which region of the world you live in: