MotionPlus cooking game on its way

Publishers Namco Bandai have announced a new cooking game for Nintendo Wii which will use the MotionPlus addon.

Touted to be much more realistic than Cooking Mama, Food Network: Cook or Be Cooked hopes to appeal to a mainstream audience by being less about gaming, and more about lifestyle enhancement. Something along the same lines as Wii Fit. It's under development by the well known Red Fly Studios, who have already done some good work on the Wii. 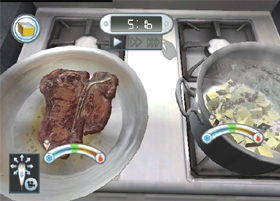 Players will use the Wiimote and Nunchuk to create over 30 dishes, utilizing all the proper techniques and ingredients as chosen by the chefs at Food Network.

Cook or Be Cooked will be out in the fourth quarter of 2009. See the game's page for more screens.