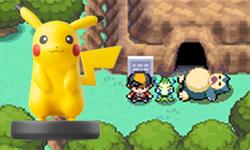 When Nintendo announced its amiibo figurines in early 2014, Nintendo fans immediately thought of one franchise - Pokemon. It seemed like the perfect match, a game whose motto is "gotta catch 'em all" and an item whose motto will soon be "gotta buy 'em all".

As the release of the first wave of amiibo approaches, bits of information have been trickling out on how the figures will be used and what games will be compatible with them. Strangely, Pokemon was never mentioned, leading many to worry that Nintendo and Game Freak were letting a golden opportunity pass them by. Well, it seems those fear were premature.

In a recent interview with Gamespot, Junichi Masuda, producer of the upcoming Pokemon: Omega Ruby / Alpha Sapphire, stated that amiibo support is definitely being considered for upcoming games in the series.

If we can find some really cool way out to use amiibo with NFC, and add some new type of gameplay, then I think we'd definitely be supportive of using it in the future.

Will you be willing to invest in Pokemon amiibo figurines? Do you think the idea could even work? Let us know in the comments.

This isn't too surprising to me. The fact that Nintendo previously released NFC figurines for Pokemon Rumble U led me to believe that we would see this eventually.

Honestly, this doesn't even both me that much. If I could pay a small amount of money to be able to obtain Pokemon that were previously exclusive to events, like Mew and Celebi, I would happily buy these figurines.

There's such a wide range of Pokemon though, you'd think a lot of them would have to be left out?