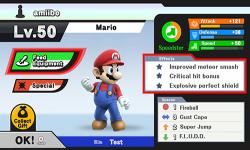 Nintendo magic and the amiibo ace

Tony Bartel, president of GameStop, was recently trying to sell investors on the potential of the Wii U. Bartel pointed out increased pre-orders for Wii U software after Gamescom as proof that the console can rebound. He also directed attention to the massive success of Mario Kart 8, which has sold somewhere in the area of 3 million copies.

Bartel stated strong first party releases and new uses to justify the use of the GamePad were things Nintendo needed to emphasize to improve sales, and that's exactly what the company has coming.

There shouldn't be any surprises here. Nintendo has been struggling to sell the Wii U, but that may soon change. Nintendo has previously worked magic, through price manipulation and quality releases, on systems expected to fail. Plus, they still have an ace up their sleeve.

I'm of the opinion that the amiibo was a large part of Nintendo's game plan for Wii U, so we haven't seen the full appeal of the system because of its long delay. After all, NFC capabilities were built into the hardware from the beginning, and early on the figures were touted as a way to enhance game play.

Nintendo has laid the groundwork for the capturing of a new market, in which neither Sony nor Microsoft can currently compete, with the smart toy. The desire for smart toys is growing and they've already proven to be a massive success. If the technically superior amiibo can manage even half the sales of the Skylanders toy line, it will be a major coup for the Wii U.

The reason the smart money isn't against Nintendo and the amiibo is simple: Pokemon.

Nintendo has sat on their big guns and have yet to announce a Pokemon based amiibo line. However, we do see a system in place for Super Smash Bros. amiibos that allows players to train electronic partners. It looks like the beginnings of a system that could easily be placed into a Pokemon title for the Wii U. Perhaps the rumored Pokken Fighters? There is supposed to be a "shocking announcement"related to Pokemon on August 26.

With that in mind, the only time you could truly write the Wii U off would be if Pokemon amiibos came and went but the sales stayed the same, and that just won't happen with sheer size of the Pokemon fanbase.