Earlier today the intrepid High Voltage Software revealed another Wii title it has in the works. Gladiator A.D is a fighting game that takes place in Rome in ancient times.

A selection of Gladiators are available to choose from, each one has strengths/weaknesses, as well as unique attacks, weapons and a storyline throughout. Brutal in nature, things like decapitations and chopped off limbs are commonplace in the game. 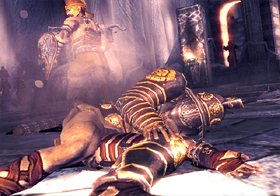 Keen to avoid button mashing, HVS say the fighting will have a strategic element.

"You will need to study your opponent's weaknesses and think through your attack patterns to succeed in battle".

The Wiimote will be used to attack and defend, MotionPlus will be supported but not to a mandatory degree. Music is also being taken seriously, the game is being scored by a composer who has experience in making epic themes. Some sound clips are available to download:

There's no release date at this time and a publisher has not been announced, but the game is already seven months into development.

The gameplay could be good and it should have better graphics than The Conduit.

High Voltage is in the money with this game and the conduit.

Nope, not quite sparta yet. They're wearing a helmet and are alive.

I can't believe they made 300 exclusively PSP. That could've been sick, guess this'll have to take its mantle of potential!