Majesco has unveiled another game in its "Go Play" series. If you're not interested in being a lumberjack, perhaps Go Play City Sports will appeal more.

Based in an urban setting, the street kid in everyone will appreciate classic games such as:

* may or may not appear in the final product. 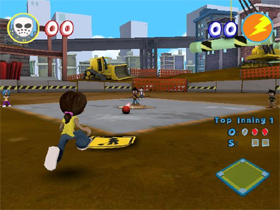 Don't try this at home?

City Sports can be played by up to four players at the same time, and support for Wii's Balance Board is also offered in addition to the usual Wiimote waggling. It's coming out in the fourth quarter of 2009.

Awesome! Drive-by-shooting. I'll buy the game just for that.