It's been confirmed by developers ARC System Works that the new Guilty Gear XX: Accent Core game will make use of the Wiimote motion controls. Purists needn't be concerned though because the Classic Controller is also an option.

If you're unfamiliar with the series, Guilty Gear is a 2D fighting game with colorful over-the-top characters and anime stylings. 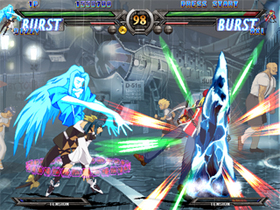 July 26th is that US? Goomba get off my girl!

Looks decent enough, looking forward to seeing how fighting games use the controls on Wii. Dragonball Z is great and sets a good example.

So it's like Marvel VS Capcom with motion-sensing? I can cope with that. One question though: Is this series better than MVC?

@Scooby: It's not better than MVC because it is very different from MVC. I would compare GG to the Capcom Series like comparing Mortal Kombat to Tekken, or Soul Calibur to Dead or Alive. Very similar and very different at the same time. GG is an amazing fighter with great music, I am going to get this one IMMEDIATELY.

SoulCalibur is my favorite fighting game. And DOA was as hard as hell. And MVC, I had no idea what I was doing on that game. So I think Guilty Gear will be better than MVC.

Are you kidding me? Guilty Gear is 10 times better than MVC!

And I'd also liked to say, THAT LUCKY GOOMBA!

Guilty Gear is in my personal the best beat em up ever, so it is in my opinion better than mvc. It has smooth gameplay and very fast action compared to capcom or any other fighting game.

Beat em up? It's a fighting game. MVC being 10 time better? Not at all. They are both very different and by the way, MVC is not the best fighting mixup, but SVC:C (SNK VS CAPCOM:CHAOS) is. Though less accessible.

If Goomba even tries to kiss Dizzy, I'm calling Mario.

You better be careful goomba, if you don't want to be destroyed. Back off! It's my beautiful princes gear. And for all of you my friends! I'll be watching you.