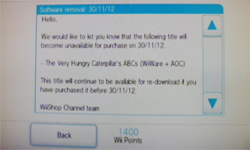 I don't imagine this news will downhearten too many of you out there, but The Very Hungry Caterpillar's ABCs has been removed from the WiiWare lineup - for reasons unexplained.

We would like to let you know that the following title will become unavailable for purchase on 30/11/12.

This title will continue to be available for re-download if you have purchased it before 30/11/12.

This is the case in Europe at least, I don't know about the US.

I'd just like to pay homage on this very sad time for us all. Taken too soon... too soon.