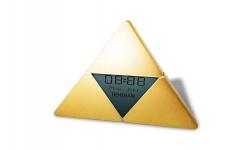 Hyrule Warriors will not be getting one, but two, special edition "Boxes" in Japan. The first, The Premium Box, will include six character costumes, an official booklet, and the clock, in addition to the game. The clock beautifully crafted in the image of the Triforce was revealed by Tecmo Koei and is sure to be a Collector's item as soon as it is released.

The second special edition, The Treasure Box, will include everything in the Premium Box, plus two extra character costumes and Link's scarf from the game. Plus, it makes a sound when opened! Currently, the Premium Box is only being sold on Play Asia, and the Treasure Box is on sale on Amazon Japan and Game City.

There is no word yet as to whether these special editions will be coming to North America, but keep your fingers crossed! Hopefully we will hear some good news soon. If there is any news, you know that you can find it here and on Twitter. Don't forget to follow us at @WiisWorld.