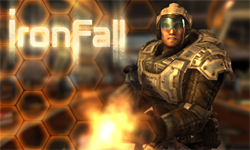 IronFall seems like a promising title on the Nintendo 3DS eShop, showing off some technical aspects worth a second glance. We spoke with VD-dev's Frederic Zimmer for more information:

Daniel Scheid: For those who may not be familiar with VD-dev, can you tell me a little about the history of the studio? You have a pretty strong background in portable games.

Frederic Zimmer: VD-dev was created in 2007, but we are making independent games since 1990, we are a small team of 3 people - Fernando Velez (Programming), Guillaume Dubail (Graphics and Graphics Tools) and Frederic Zimmer (Programming). Frederic has recently joined us to help us complete IronFall and work on future projects (previously Technical Lead on Watch_Dogs at Ubisoft Montreal).

DS: Ironfall seems to be facing in a completely different direction than most eShop titles. How did your team end up deciding to develop such a robust title for a market that frankly isn't technically innovative?

FZ: I think the market depends on player's expectations and developper's creations. The decision to do independent games went with this vision and we wanted to do a TPS since a long time (our first game, "Jim Power" was a platform/shooter).

DS: Tell me more about the world of Ironfall. What kind of adventure should I expect and who are the key players in this game?

FZ: Iron Fall is a TPS for the 3DS, taking place in a near future, where some troubles are coming from outer space... Throughout the campaign, the player will experience a story where he will not only have to fight against the invaders, but he will also need to use his brain. The gameplay is varied, multi-phase shoot, one or two phases of infiltration, ride in helicopter, minigame, QTE, Mega Boss...

DS: It was mentioned in the tech demo that Ironfall is compatible with the Circle Pad Pro. Obviously this control option may be more familiar for those who play shooters on consoles. How important was it to implement this control scheme?

FZ: Fans request 'Circle Pad Pro' several times in forums, so we decided to add it! Furthermore, several control schemes will be offered to the player (with or without CPP or stylus), and additional options like "inverse Y" or "left handed" will be provided.

DS: Many portable games thrive on their replayablity, about how long would it take the average player to fully experience Ironfall?

FZ: Without additional modes or collectibles, we estimate the duration of the game to 4-6 hours of intensive and rich gameplay. Finishing completely (100%) the game could take maybe 12-15 hours.

DS: What can you tell me about the Big Bang Engine and how it was developed? What were some of the things possible on Nintendo 3DS that you might not think it was capable of?

FZ: It's an engine we have programmed from scratch and is optimized for the Nintendo 3DS. It took us several months to write (days and nights), and is written fully in assembly code, using all the ARM optimizations we know. We also have written our own graphics driver for communication with the 3DS GPU to get the best of the handled graphics processor (well at least we hope ;). We known since a long time that the 3DS has horse power under the hood ! we just wait to have the time to develop software who use that power, with the Big Bang Engine, we reach our expectations !

DS: How big of a factor was 3D in developing Ironfall? Recently Pokemon X&Y have caused a stir for abandoning 3D visuals throughout a majority of the game in order to maintain a frame rate. Did your team encounter any difficulty when it came to 3D visuals?

FZ: 60 frames per seconds is our goal ! Shooters offer better playing experience with this frame rate. With the engine we can reach 60 frames per second with and without stereoscopic view (3D). But if frame rate drops we don't want to sacrifice the amount of AI, and graphics we have on screens, just because of the stereoscopic view (sometime we have to draw 3 screens, 1 for the left eye, 1 for the right eye, and 1 for the bottom screen, where action will also take place sometimes). We have a feature that allows in REAL TIME, the player to switch from 60 FPS with the 3D slider pushed down, or 30 FPS with 3D slider pushed up (no need to go to some menu).

DS: Will Ironfall utilize the 3DS's gyroscope in anyway? Was there a conversation at any-point about valuing traditional controls over the unique features of the 3DS?

FZ: The bottom screen will be used for specific game play sequences, microphone will maybe used in infiltration, we don't have plan to use gyroscope for now but until the end of the dev, everything can change!

DS: What sort of price point should players expect Ironfall fall under?

FZ: We want to offer the best quality / price ratio, nothing is decided yet, but it could be between 9 and 15 usd.

DS: Ironfall debuted with a very impressive tech demo that flat out detailed what the game is capable of, whereas many 3DS games focus on gameplay during their unveiling. How have players reacted to first glimpse of Ironfall?

FZ: We are very pleased, many players and journalists have appreciated and we thank them, it's very nice to see that nearly 200,000 people have viewed the video (over 10,000 loads anything on our site).

The gyro aiming, PLEASE add it!

"we don't have plan to use gyroscope"

Please copy the aiming assistance from Uncharted/Killzone for Vita. Don't use it to replace the right analog stick, cause that's stupid. It can't do that. Use it for very slight aiming adjustment.

Also, please tell use the planned/potential release date and size (in megabytes/gigabytes, not useless blocks) so that I can buy a bigger SD card.

I'm impressed with this game so far, hope it can live up to expectations.

Small update on IronFall. VD told me they're looking to keep the game as small as possible and the release date isn't sure, but June is a "maybe". Merry xmas!