Sega has decided to release a remake of Jambo! Safari on Nintendo Wii and DS.

Originally a hit arcade game from 1999, Jambo sees you driving a jeep across the African plains in search of animals. Along the way you're given any number of tasks, like lassoing (using the Wiimote), taking pictures and diagnosing sick animals. 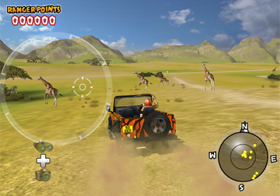 The Wii version will have a number of modes to spice up the action, including multiplayer for four, and co-op play as well. Both your ranger and your vehicle are to be customizable. Jambo! Safari will be out towards the end of this year, some screenshots are up now.