In a seemingly odd move, Konami are publishing a Wii game based on Target: Terror, a sub-par coin-op effort from 2004.

Target: Terror used a light-gun at the arcades, and will be the first Konami game to support the Wii Zapper.

As the name suggests, you play the role of an elite agent protecting the US from a wave of terrorists. Terrorists that sometimes like to hang out at the driving range. Two player co-op is supported so a friend can join in the fun as well. 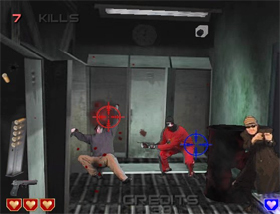 The war on terror is ugly. 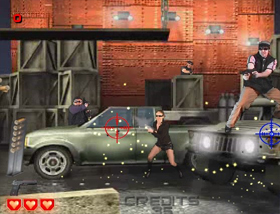 You're all terrible shots.

The token mini-games will be there too, this is a Wii title after all -_-. Expect to see Target: Terror sometime during the first quarter of 2008. 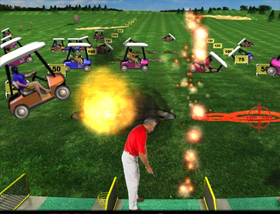 Is it me or is everything about terrorists? This had better not be a Splinter Cell knock off.

When I saw the title, I was thinking maybe Metal Gear Solid 4: Guns of the Patriot was coming to Wii.

This game looks like the old Arcade games you see in, well, arcades. Combining computer-generated background with actual human movements/pictures. Now it looks okay, but the last one with the gold just turned this game into a bit ridiculous.

This game looks so awesome, I'm getting it for the cheese factor alone.

This is a bit strange to have on a Nintendo system, don't you agree?

Yes, Diddy, everything nowadays is about terrorists. Unless it's another WWII shooter.

This is really cool, an arcade like game coming to the Wii.

Golf is a lot more interesting!

That last caption is funny.

Releasing this game would be an act of terrorism.

I want a game in which we actually have to eliminate Osama, Musharaf, and Ahmedinejad. Of course, in real life, I don't believe in killing anyone. That's why I play vidja-games.

Wow I hope this isn't really coming out. The graphics look terrible.

Believe it or not, I've actually played this game, and it was pretty fun. Nothing spectacular, mind you, I mean. Look at the snapshots. Whatever, it's mediocre at best, however, the cheese factor adds so much to the gameplay. You're in a boring, polygonal world, when all of a sudden, a real man goes, "Aargh!". That scares the crap out of me. So I shoot him. Easy, and fun.

The graphics are worse than Chicken Shoot!

Actually this game is pretty cool. Ya, the graphics aren't so great but what can you expect from a game using FMVs? Seriously, how much fun would this game be? I can see the cult following and the drinking games starting now. You shot an innocent. Drink. Or I got 7 medals and you only got 5 so you have to take two shots. This could be awesome. I plan on getting it just for the ninjas throwing turkey bombs (yes, that really does happen in the arcade and I assume the port).