MadWorld gets a helping hand

In a promotional stunt for the British release of MadWorld, publishers Sega have strewn fake amputated arms through UK cities - each one soaked in blood and holding a copy of the game.

The severed limbs have been created in black and white, in homage to the game's style and as not to cause offense to the public. So far these things have been spotted in locations like London's Tower Bridge and Carnaby Street. 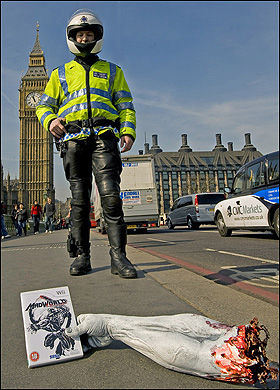 Now why can't they do this kind of stuff in the us? Very cool.

Hopefully the box is empty, or people would get a free copy.

That is so badass! I wish they would do that here in the states.

So.. people can just take them?

No freakin way. That is so badass.

Because, Wiiman, the steady stream of lawsuits filed by money hungry opportunists claiming emotional distress, would be never-ending.

That last comment distressed me. Where's my lawyers' number?