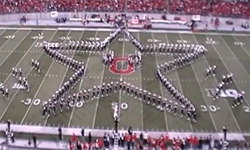 At a recent football game between Ohio State and Nebraska, fans were treated to an unforgettable half-time show dedicated to the heroes of video gaming. With some stunning choreography, the Ohio State University Marching Band paid homage to classics like Space Invaders, Pac-Man and Tetris.

Plenty of Nintendo franchises were included in the show too - Super Mario bros., Pokemon and Zelda were all in the mix. Check out Epona galloping at 6:05.

I can barely imagine how many hours of practice went into that! Incredible, especially the horse.