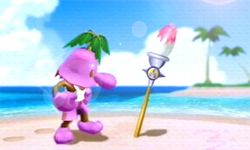 Take a look at this video from DYKGaming on YouTube. It's crammed with little-known trivia on Super Mario games - including cameo appearances that never made it in Mario & Luigi's Superstar Saga (GBA), the secret identity of speedy Il Plantissimo (pictured) in Super Mario Sunshine, and split-screen co-op play that was shelved for Super Mario 64.

I'm not sure that split-screen co-op play would have worked very well, too much happening at once.