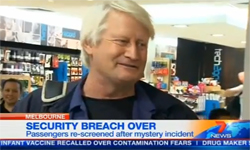 Mario's voice actor Charles Martinet has been doing the rounds in the southern hemisphere lately, attending expos in Australia and New Zealand. When one of his flights was delayed due to a mysterious security breach (likely Bowser's handiwork), Charles wound up being interviewed on the local news station.

Although he's recognizable to many Nintendo fans, the news reporters weren't savvy - and Charles is treated as an anonymous:

How's that for a fun coincidence?

I'd know that face anywhere.