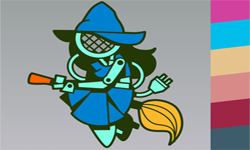 A digital album was released yesterday by The Electric Witch (aka Zac Bentz). It's called NEScapism and features synthesizer versions of some classic old games - namely Final Fantasy, Metroid, Castlevania, Dragon Quest and The Legend of Zelda. Take a listen:

The first track is my personal favorite. You can learn more about the album at http://zacbentz.bandcamp.com/album/nescapism.

That Final Fantasy track made the hairs on my back tingle! The album's good value for $1.