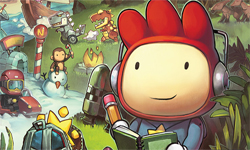 Hidin' in the shadows

On their Facebook official fan page, retailers GameStop posted this teaser image. It indicates that several Nintendo characters will be making an appearance in the Wii U and 3DS versions of Scribblenauts Unlimited.

It's not a given, but we're saying the left hand side includes characters from the Super Mario series, i.e. Yoshi, Princess Peach, Luigi and Mario. On the right side is a little more ambiguous, but one possibility is Epona, Link and a Goron - all from the Legend of Zelda franchise. What's your theory?

Donkey Kong is gonna be in Mass Effect 3 too.