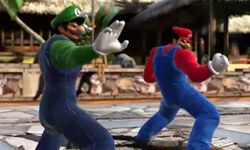 As an added element of fun, the Wii U version of Tekken Tag Tournament 2 lets fighters dress up in costumes of famous Nintendo characters. These costumes aren't interchangeable though, it's a case of one per fighter. Famitsu magazine suggests this is how the list looks:

As if that wasn't enough, there's also a special Battle Mushroom Mode, where a variety of power-ups from the Mario universe make an appearance and affect the gameplay. Here's a crazy video:

I heard there won't be a Kirby one though, sadly.