In honor of the upcoming November 21st launch of Donkey Kong Country Returns for Wii, Nintendo has filed a request with the US Patent and Trademark Office to trademark the pop-culture phrase "It's on like Donkey Kong". For those unfamiliar with the term, "It's on like Donkey Kong" is an old, popular Nintendo phrase that has a number of possible interpretations depending on how it's used. In addition to Nintendo's use, it has been used in popular music, television and film over the years, pointing to Donkey Kong's status as an enduring pop-culture icon and video game superstar.

Donkey Kong is one of the oldest and most recognizable video game characters. He has been a pop-culture icon since the launch of his 1981 self-titled arcade game. Donkey Kong again rose to prominence in the 1994 Super NES game Donkey Kong Country. His new game, Donkey Kong Country Returns, marks his triumphant return in a new side-scrolling adventure with new challenges amid a beautiful setting. The game features the first simultaneous cooperative game-play mode for the series, with one player controlling Donkey Kong and the other controlling his agile pal, Diddy Kong.

There are also a few desktop wallpapers to celebrate the game's release. 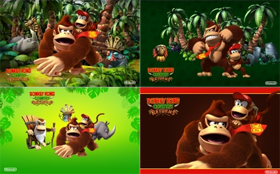 Never played the original three, just the old arcade game and DK64, but this game looks really fun, and I might buy it.

To quote Screwattack's Destin, "did you wear your condoms?" "It's on like Donkey Kong!".