Third party accessory makers PEGA have released a pair of boxing gloves for use with the Wii. They can be used in Wii Sports, and likely most other boxing games that come out for the system, such as Ready 2 Rumble and the Japanese Hajime No Ippo (Victorious Boxers). 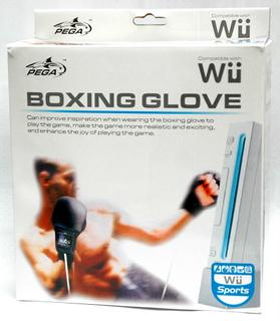 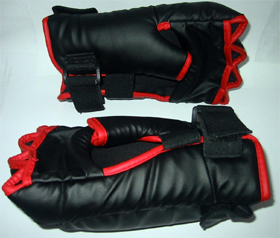 I didn't hear no bell!

Ok, I think this slightly borders on outrageous. If the Wii wasn't motion sensitive, I guess I could see this being bundled as a game, but I don't think right now there are enough boxing games out there that justify this accessory. Don't get me wrong, I love the Wii, but all of these other accessories take away from the novelty. The gun shell was a cool idea because there are more shooting games out there, but sorry, this one is a no go.

Uhh, is that guy in pic one boxing his actual Wii? That seems like it might send the wrong impression. Not that the Wii can't take a punch.

These seem pretty cool, I mean now you'll seem like you're getting a workout. I'll buy them.

Oh nice. I hope they pick up punches better than the Wiimote in Wii Sports Boxing. I think I'm going to get me a pair. There's another thing I'm hoping for too: I hope nobody gets in my way while I'm playing.

Why are the "i"s connected in "wii"? Odd. Those look pretty cool. Oh no, he's punching the Wii!

I'd consider buying them if they came with a good boxing simulator. Not on their own though. That would just be lame.

I think I will stay far far away from this one. The guy is punching a Wii!

I noticed they put the Wii remote INSIDE the gloves. Is anyone else frustrated with the nunchuck cord when they box? I sure as hell am. I'd love to see a pair of gloves made - each with a built in sensor. No cord? No controller? All out boxing? Awesome. I'm not sure it'll happen, but I can hope.

Valerie, I am with you, if they can make the Wii remote work without a cord, why does the nunchuck have to be connected to it? And if it has to be connected, why didn't they make the cord longer? I am disappointed in this accessory, I was really hoping for the same thing.

This will be fun. He.

Bad design. I got a pair as a present and the foam cutouts are shaped so that the nunchuck directional controller presses into the back of your hand. Also, the Wii controller must be taken out of the sleeve to fit into the right hand cutout - and it fits in head-first so that you cannot use it to actually control the game. As an added minus, there is no way to work the buttons when you have the gloves loaded. Stupid.

The problem with the controls in Wii Sports Boxing is that they don't work quite the way you'd expect them to. The instructions for the game don't tell you, but you have to sort of flick the wiimote and nunchuck to get the movements to register. Search youtube for a few videos demonstrating this. One's called Tips for Wii Boxing, the second one is called Nintendo Wii Boxing: How to Hook, Uppercut, Jab, Dodge and the third's called Wii Boxing tips: "5 Elements" ten minute trainer. Until I found those videos I thought there was something wrong with my nunchuk because most of my left-hand punches didn't register.