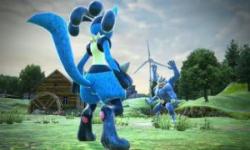 Only confirmed for arcades in Japan so far

One small trailer is all it took. Pokken Tournament was confirmed in a live stream on niconico. The trailer features Lucario and Machamp locked in combat, all in glorious 3D. It seems Bandai Namco has been tapped to develop the title and it is slated for a 2015 release.

Here's the rub though: It's coming to the arcade first, with a console release date yet to be announced. Japanese fighting games often release in arcade cabinets first and are then ported to the home consoles at a later date.

Hopefully we can get a solid home console confirmation and release date in the near future, possibly through a Nintendo Direct.

I'm pretty interested in this. I hope it makes its way to Wii U.

This could certainly bring in some much needed interest for the fighting genre and for Nintendo. Well done.

Yep. And Pokemon has a huge fan-base. If Nintendo uses their heads they will use their over-50-percent market share of the Pokemon franchise, port this game to Wii U, air commercials in all major territories, and sell Wii U like hotcakes. Executives at EA, Ubisoft and other major 3rd parties will be scratching their heads wishing that they would've held on to the Nintendo-train a little longer.