Well known sporting goods manufacturer Puma has launched a pair of shoes inspired by the Mega Man character. Dubbed "917 Lo Mega!", these badboys are made from a synthetic leather material which has a shine to it.

Originally released by Capcom in 1987, Mega Man has enjoyed long-running success on a variety of consoles. His latest outing, the challenging Mega Man 9, which I've beaten, was also released to critical success. 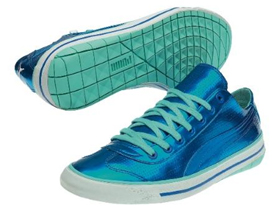 They're available from the official Puma website for a current asking price of $65.

If it wasn't for the fact I'd get laughed out of the room wearing those, I'd totally buy them.

Why not Mario and Sonic?

Cool but not for me, and who hasn't beat mega man 9. I supported it for all 3 of the new consoles and finished it on all 3! Going to do it one more time on 360 because I have two profiles I play on.

Basically this has nothing to do with Nintendo OR the Nintendo Wii, so I have one question: Why did you post this?