The original 2D classic Mega Man returns in Mega Man 9 for WiiWare. This latest Mega Man title brings the series back to its old school roots with retro action platforming gameplay and classic 8-bit NES-style graphics and sound. Relive the Mega Man experience with classically inspired bosses, each with their own unique weapons and weaknesses.

The story of Mega Man begins in the year 200X, as the advanced science of the era has created industrial robots that co-exist with humans. However, an evil genius, Dr. Wily, plots for world domination and creates his own robot army to take over mankind. Luckily for humanity, Dr. Light outfits one of his domestic robots "Rock" to fight Dr. Wily's creations. Mega Man is born.

Set after the events of Mega Man 8, multiple riots have sprung up all over the world. Whilst many people suspect that this is another plot from Dr. Wily, Dr. Light is stunned to recognize that some of the robots rioting on the TV screen are his own creations. Even more stunning, Dr. Wily appears on television to proclaim that Dr. Light is the evil mastermind behind these latest catastrophic incidents and it's up to Mega Man to clear his creator's name!

When Mega Man 9 was unveiled to the public a few months ago, it was met with a kind of sharply divided reaction that would make the United States' donkeys and elephants proud. On the one hand, mature purists felt that the game was going to be the holy grail of downloadable...read full review 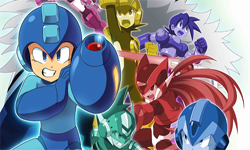 Fans revolt over Mega Man on iOS
This year marks the 25th anniversary of Mega Man. Capcom's iconic blue bomber is known for bringing the pain in a long series of action...

Mega Man classic poll
With over a quarter of the votes, Silent Hill: Shattered Memories proved to be "Wii's scariest game" in our recent poll. Time for something...

Mega Man 9 secret unfound
A blog post by Seth Killian on the Capcom website says that a secret in Mega Man 9 remains unfound. Mysteriously, he says that fans are...

Mega Man 9 intro video
The intro for Mega Man 9 has been let out into the world by Capcom in the form of a video. In terms of storyline, it's as basic as you're...

Mega Man 9 trailer
Classic Mega Man is back, in the year 20XX no less. The first English trailer for Mega Man 9 has now been made available. It shows off a...

Mega Man 9 priced and DLC
According to an article in Famitsu, Capcom's Mega Man 9 will feature downloadable content. Unfortunately that's as far as the details go....

Mega Man 9 first footage
The first video of Mega Man 9 (known as Rockman in the east) in action has been released. Long-time character designer Keiji Inafune has...

Mega Man 9 exclusive to WiiWare
A few days ago we reported that an 8-bit retro-styled Mega Man 9 was coming to WiiWare. It's now been confirmed by Capcom that they have no...

Mega Man 9 for WiiWare
It's been confirmed in Nintendo Power magazine that Mega Man 9 will be heading to WiiWare as a downloadable game. Fans of the NES...

Ya, I glad to see that it's coming back retro. And it should be done soon. I mean this technology is pretty dated so they should be able to just pop one of these games out quick. *Alright Mega man will fight some robots. While moving left/right and perhaps up and down*.

Looks good so far but I want to see some actually gameplay.

Well I was hoping Mega Man 9 would look 16-bit, this looks like NES.

Looks pretty fun, how much does it cost?

Let me be honest here, I'm not too hyped about the game being mostly 8-Bit. I was hoping maybe the graphics would be updated. Oh well. I wonder what they'll make Bass look like (that is if he shows up).

Capcom probably put this game together in one week. Cool power-ups and great music will make this a definite download for me. There's a certain charm about the 8 bit sprites that newfangled graphics can't capture. I hope that they push the NES effects to the limit because it's been over a quarter century since the release of the NES! Damn, a quarter century.

Come to think of it, how classic is Capcom going to make MM9? Are they going to include the charge mega buster and the slide or the old run and jump style?

Looks old. I'm all for retro, but this is a bit much.

SEGA should do this with Sonic, make it like the Master System version, but Mega Man should be 16-bit. Let's face it, SNES graphics age better and best compared to 3D and 8-bit.

I finally got it and it's freakin awesome.

When I heard it would go back to 8-bit, I thought I'm going to hear some tight music as expected and raw gameplay.

Oh man, can't wait to dl this one. The 8-bit MM was the best. Hopefully it lives up to the original 8-bit legends, too.