Rabbids on their way home

The latest issue of Nintendo Power magazine reveals details of a new Rabbids game under development by Ubisoft.

It's called Rabbids Go Home, but rather than being a collection of mini-games this one is allegedly a fully fledged action adventure.

The plot sees the rabbids trying to make their way to the moon, having decided that's where home is. They set about collecting as much junk as possible, in order to build a "junk tower" high enough to reach the moon. 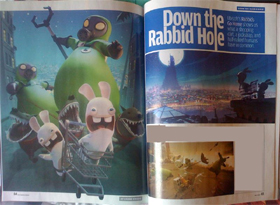 Ubisoft's Michel Ancel is said to be much more involved in the making of Rabbids Go Home than previous titles. Speculation says this could be the last we see of the rabbids.

Well, it can't be any worse than the past 3 games. How did you guys get this info? NP hasn't even updated their site yet. Is it on sale in the US? Because I'm in Canada and I don't see NP anywhere.

Yes! Just like the old rayman games, I've been waiting for this to happen again.

I am happy they are moving them away from the mini games, they were fun and all but this seems like nice step up, and hopefully this won't be the last time we see those crazy rabbids.

What happened to my beloved Rayman.

Why couldn't they just revive Mr. Dark from the original, better yet make a direct gameplay sequel to the original even in 2D. The Rabbids are overmilked.

It better be the last. Rayman really needs to come back.

This is about time! Bring back Rayman, for goodness sakes.

DKL, this is possibly the first time I've ever agreed with you, it would be great if they made a 2d sequel. Everything was so surreal in the first game, and Mr Dark was frikin' awesome. I'd love to see some more of that!

Three long years and still those friggin rabbids are destroying our ever loved Rayman, let's hope that those little monsters won't be corrupting our limbless hero ever again.

Yes! The rabbids are out of my life. So now I can go back to kicking butt.