The Rabbids will receive their own standalone brand with the release for Holiday 2009 of the comedy-adventure Rabbids Go Home.

Developed by Ubisoft Montpellier, the team behind Beyond Good & Evil, Peter Jackson's King Kong: The Official Game of the Movie and the original Rayman Raving Rabbids, the game will benefit from a new engine designed specifically for the Wii home video game system from Nintendo, offering the Rabbids a hilarious adventure in a brand new universe.

The Rabbids are already beloved the world over, selling 6.5 million copies of their raving adventures and starring in their own series of videos that have kept web surfers laughing for years. Moving up to star billing in their own brand of games was a logical next step and fans will now be able to enjoy the fun in this humorous adventure game where the Rabbids unleash their insanity onto the human world as they attempt to return to their Rabbid home.

Rabbids Go Home has no review on Wii's World. Write a review 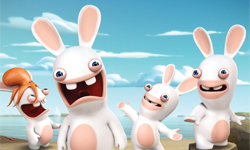 Rabbids get a movie deal
Ubisoft has announced a deal with Sony Pictures which will see their infamous Rabbid characters star in a movie. Rabbids came from...

Rabbids spoof Twilight New Moon
Always ones to keep up with popular culture, Rabbids have put up a comical video clip done in the style of Twilight. Rabbids, you...

Rabbids Plunger Gun accessory
The Rabbids may be on their way home, but accessory makers Mad Catz still want you to join in the fun with this "plunger gun" shell for the...

Rabbids want to win core gamers
According to Jacque Exertier from Ubisoft, their latest Rabbids title is a significant departure from the mini-game fests we're used to,...

Rabbids on their way home
The latest issue of Nintendo Power magazine reveals details of a new Rabbids game under development by Ubisoft. It's called Rabbids Go...