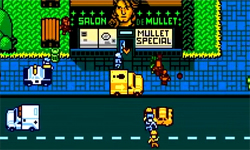 I think it's safe to say WiiWare's version of Retro City Rampage is a little late to the party, but as the phrase goes, better late than never.

This game will be available to download tomorrow, regardless of which side of the pond you live on:

Retro City Rampage's developer Brian Provinciano has also uploaded a video detailing some of the interesting technical aspects of squeezing RCR into a game that's actually capable of running on 8-bit hardware (like the NES) - The Making of ROM City Rampage.

I'd practically forgotten about this.