Here's the cover art for Rock Band 2. Developers Harmonix say the Wii version won't be the same gimped affair that the first game was. Whether or not that's true, if you're into these kinds of games, you might want to see how Guitar Hero: World Tour turns out before deciding. 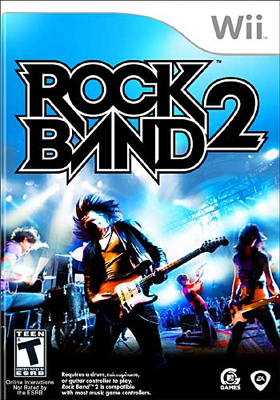 Oh goody another one of these stupid games.

Who cares about this, guitar hero will be so much better.

If they get an all new drum set, I will be pissed. They barely changed the crappy guitar too. It's the same but with a wood finish. World Tour or Rockband 2, we'll see.

I don't see why these peripherals cost so much and they break from normal use. Rock Band and Guitar Hero players break more guitars than REAL rock stars.

Quartz these games are not stupid. They are actually fun. If you hate them so much why bother looking at the box art.

I think I'll pass, I just wanted to see the box art.

I just bought rock band for the Wii a couple weeks ago, then I heard that rock band 2 is coming out. So now I am very mad at harmonix.

Most people say this game sucks because they can't afford it. It's a great game, and guitar hero are only getting away with the drums because they're wireless. And emmanuel, I think you can use rock band 1 sets for rock band 2.