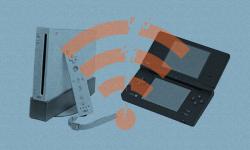 Yes it is true. Nintendo recently made the announcement that they will be pulling the plug on wifi for the DS and Wii on May 20th.

This means that online play, free add-ons, and leaderboards will all become inaccessible for DS, DSi, and Wii devices. The shutdown also includes the function of being able to play Wii games on Wii Mode for the Wii U. The games however will continue to function normally while playing offline.

Nintendo made the decision to keep the Wii Shop Channel, Nintendo DSi Shop, and on-demand video service for the time being, but for those who enjoy online play will now be forced to make the switch to the more recent Wii U and 3DS devices.

Make sure to transfer all of your pokemon to the 3ds or pokemon bank!

So Wiiware lives on, for now.

This also applies to the downloadable puzzles for Professor Layton games, yipes :(