In a recent interview Suda 51 talked about how after a few bug fixes, No More Heroes will be ready for submission to Nintendo to gain approval. When asked about developing for the Wiimote he said:

"In the very early stages of the concept, we had in mind that we didn't want to just shake the controller. I knew that it wouldn't work well. I knew that having you perform a combo with the button and having the final blow be one swing would be better. I knew that to have a real refreshing and exciting action game you'd need to use the buttons at some point and that using the action to perform the finishing blow would be enough. If people had to swing the controller from the beginning to the end, they would get really tired".

He also commented that his team would be happy to make a sequel if it turns out to be successful. Even a Killer7 sequel isn't entirely out of the question if Capcom requests one.

There's a box art floating around for No More Heroes, but it's suspected to be fan-made and not the genuine cover: 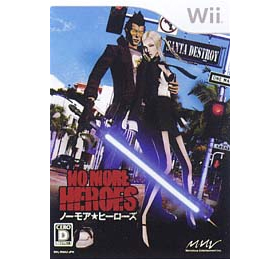 Suda51 is awesome at every game he makes. Keep on rockin grasshopper.

Can't wait to get this game.

Even if the box is fan-made, it's still cool. They should use it.

Can anyone believe I've never heard of Suda51 until No More Heroes?

Free roaming and hardcore fighting with combos, just what the doctor ordered.

Weren't you aware of the existence of K7?