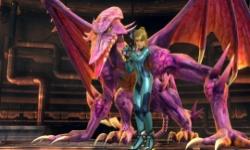 During its latest Nintendo Direct, Nintendo revealed a plethora of info for the upcoming Wii U version of Smash Bros., including exclusive game modes, exciting multiplayer options, and new characters (plus a fan favorite returning).

The Direct was hosted by the ever entertaining Smash announcer, who over the course of 30 minutes reveled over 50 new details for the game. While some of the details had been expected (or leaked), there were a few that left fans surprised and extremely excited.

It's safe to say that this will be the most ambitious version of Smash Nintendo has ever made: with online tournaments, amiibo functionality, and a stage builder, which will allow players to build and share their dream levels. One has to wonder if Nintendo can truly cram all this into one game!

I've posted the Direct below, so make sure to check it out, and let us know what you're most looking forward to in this game.

That's a lot to take in. I'm really looking forward to this, only about a month left to wait.

I find the 8 player smash to be the most exciting aspect of the upcoming game!